In the Studio
Apparition Series
​
​ 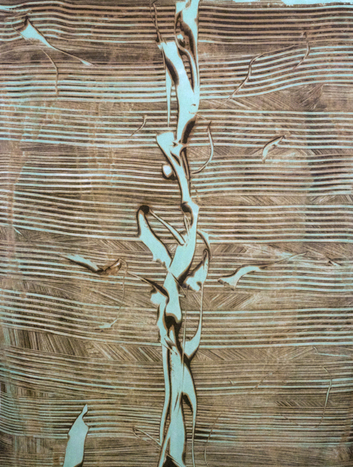 The Apparition series is grounded in the lyrical and fluid movements of historical calligraphic writing and the intangible record of mystical ephemera. The works are monotypes, which is a single and unique one of a kind print. What I enjoy about working with bees wax and pigment, using this process, is the marriage between painting, drawing and printmaking. I brush the color onto the plate, I draw and mark on the plate surface, and I transfer the image to paper where the color seeps and absorbs into the surface fibers.
Jane Allen Nodine 2014


Notes on the Apparition Series
The prints originated from an earlier work titled, Channeling André Masson; Ode to Automatism, that drew inspiration from calligraphy and automatism. Calligraphy: from the ancient Greek, kallos "beauty" and graphẽ "writing. A mark or trace on a surface, the art of giving form to signs in an expressive, harmonious, and skillful manner. A form of writing where letters and words may or may not be legible. Automatism: form of automatic writing or drawing attributed to spirits and the divine. In ancient times it was considered inspired activity, a gift of the gods. The prevailing contemporary view is that automatisms are the product of secondary personalities who produce knowledge or information a person has learned and repressed or forgotten.
Image: apparition.85, 24 X 18", bees wax, pigment, graphite, walnut ink  on Washi paper